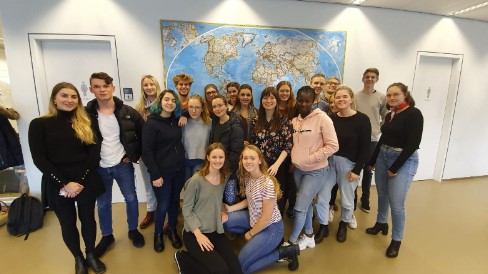 Amnesty International students are enthusiastic, positive, and motivated students mainly from Windesheim fighting for the rights of people all around the world. As members of an Amnesty International student group, they are part of a network of groups with other students all around the Netherlands, 13 in total! The approximately 40 members of the student group in Zwolle organize events to raise awareness for frightening cases where human rights have been violated, but also have fun and learn a lot while doing it. Two times a year a National Student Day is being held with all student groups in the Netherlands. During this day they share their knowledge and expand their network with people from all around the country. Furthermore, there are monthly online masterclasses hosted by the Amnesty Office in Amsterdam about various topics related to human rights which are super interesting and again a very good way to network.

The Student group in Zwolle aims to organize events regarding human rights. Usually, they meet around once a month and discuss further actions that can be taken and also just to catch up with each other. One example of an action in the last months was the Paddle-Protest for refugees in Camp Moria to raise awareness and put the Dutch government under pressure to act and not look away. Another example is the successful "Let's talk about yes" campaign. The Zwolle group wrote with chalk quotes on the ground to raise awareness and demand the Dutch government to change the law that everything is considered as rape when there is no consent - fortunately this campaign is successful and the law will be changed soon. The next two upcoming events are to support the homeless people in Zwolle (e.g. through providing them with food) and to organize the most famous action of Amnesty International at Windesheim: the Write For Rights. The students have a lot of fun together and enjoy meeting new people next to contributing something valuable to the society. If you want more information check out their Instagram (amnestystudentszwolle) or Facebook (Amnesty International Studentgroup Zwolle). If you want to be part of the group or have any questions don't hesitate to contact them via social media or email .